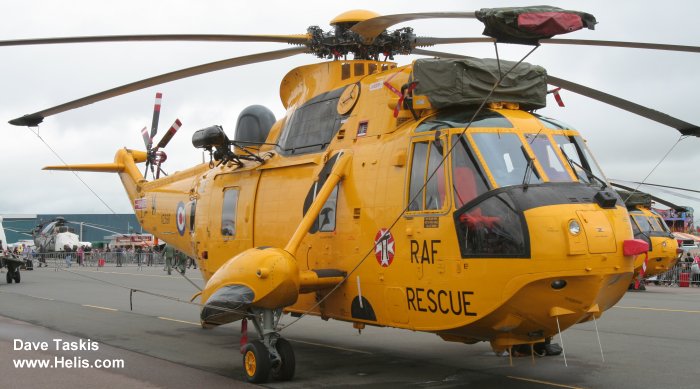 
The HAR. Avionics were similar to those of the HAS. As typical of earlier SAR variants for export sales, the rear bulkhead was moved back 1. Fuel supply was increased to 3, liters US gallons. Of course, a rescue winch was fitted over the sliding door. Six new "HAR. The Commandos were easily distinguished by fixed forward landing gear, without sponsons, much like that of the civilian SL; they did have disk-type inflatable flotation packs. Although British armed services had snubbed the Commando early on, in , the Admiralty asked Westland for a replacement for aging Wessexes, with the first "Sea King Helicopter Cargo HC Mark 4" performing its initial flight on 26 September , and initial service deliveries late in that year.

The HC. It retained the metal six-bladed rotor, and had seats for 28 troops; it appears a rescue winch was standard fit, some of the HC. They had no radar. They were painted overall desert pink for the conflict.

During the Balkan Wars of the s, HC. The Sea King HC. Some HAS. The machines committed to combat operations had their sonar yanked, to then be fitted with defensive countermeasures; a FLIR turret alongside the nose; and a door-mounted 7. A rescue winch was standard kit, with these machines being redesignated "HAR. It also had other modernized avionics and composite BERP main rotor blades.

The reduced weight of the modernized systems carried by the HAS. Five HAS. Norway obtained three retired HAR. Seven retired British Sea Kings of various marks were passed on to Pakistan from , with some to be used as spares hulks. The Pakistanis were already Sea King operators. That led to the conversion of two HAS.

They retained the ARI search radar, but of course sonar was deleted.

Of course, the radomes cut into performance, but since the AEW. The two rushed AEW. The AEW machines operated with a pilot and two operators; since the inflatable antenna radomes were known as "bags", the crews became known as "baggers" or "bagmen". The new radar, the Searchwater AEW X-band radar, was substantially lighter than the old radar but had three times more transmitting power, giving it greater range and discrimination; it could deal with surface clutter, and could track both air and surface targets.

The old grayscale radar displays were replaced by color displays, with a touchscreen interface and a processor system that allowed the simultaneous tracking of hundreds of targets.


Communications systems were also modernized, most notably with a datalink system that permitted integration of target data from other sources into the Sea King's operator displays. One of the operator controls was labeled "WTFGO", for "Weapon Target Fighter Global Overview"; the operator could press it to get a map of datalinks to fighters and intercept vectors of the fighters to the targets. Two were lost -- ironically, both the initial two AEW conversions -- in a mid-air collision in the dark in They served in the Second Gulf War, being used as battlefield surveillance and control assets.

The first export customer was West Germany, which ordered 22 "Sea King Mark 41" machines for SAR, with first flight in , and deliveries in A replacement machine was delivered in They introduced the expanded cabin -- thanks to the rear bulkhead being moved back -- expanded fuel supply, rear bubble windows, and two windows on the left of the SAR Sea King variants. Some of the avionics were of German origin.

From , Messerschmitt-Boelkow-Bohm updated 20 of the Mark 41s to a surface warfare configuration, carrying four BAE Sea Skua light antiship missiles -- one attached outboard of the sponson on each side, one on the corner of the fuselage inboard of the sponson on each side. They were fitted with Ferranti Seaspray targeting radar, in a "chicklet" radome on the left side of the nose, along with a datalink to control the missiles, and also had a defensive countermeasures system.

The chicklet radome was an instant recognition feature for the German Sea Kings. The German Sea Kings were updated in service with other modernized avionics, including GPS receivers and an imaging turret. The Mark 42s were very similar to the HAS. Three replacements were ordered in and delivered in ; they were "Mark 42A" machines, like the HAS.

Twelve "Advanced Sea King Mark 42B" machines were ordered in , with the Indian Navy then exercising an option for eight more, for a total of Another machine was built, but lost in a crash before delivery to India. Deliveries were in and While some sources have described them as "Commandos", they had the main gear sponsons and no additional windows.

They had Bendix RDR C radar in a nose thimble, with no radar mounted on the spine; they had the composite main and tail rotors, but it seems they retained the Gnome H engines.

Early on, Indian Sea Kings were painted dark blue except for white top decking; later on, they were given overall light blue-green colors. They remain in service, but the fleet is beneath half strength, and they need to be replaced. Efforts to do so haven't gone well, an effort to replace them with Sikorsky SB Sea Hawks having collapsed after over-extended wrangling between the Indian government and Sikorsky.

They traditionally flew in orange-and-white "creamsicle" colors. A single "Mark 43A" was obtained in as a replacement, being much the same as the Mark 43s but with the uprated transmission and six-blade tail rotor of the HAS. In the early s, all survivors were upgraded to "Mark 43B" standard by Westland. They featured Sea Searcher radar in a drum radome on the spine, plus Bendix weather radar in a thimble radome offset to the left on the nose, and an infrared imager turret under the nose. The rest of the avionics were generally modernized.

They were delivered from into They flew in overall dark blue colors. I managed to get ahold of four of the main rotor blades and collected them on the 10th Janaury At this moment in time, I am still in search of the fifth. Following the auction, I had 7 days to organise the transport of the Sea King from Witham near Grantham just off the A1 back up to my home town of Scarborough. After a few hours of high stress levels and lots of man power we finally loaded XZ onto the semi-low loader.

The mile journey took 4 hours to complete, but was worth every second. Chris at Leicester Heavy Haluage did an awesome job and is highly recommended for anything unusal upto tons. I thought the transport would be a nightmare but actually it turned out to be pretty straigt forward.

Note: I had a custom built frame made to sit the 3 ton helicopter on. Leicester Heavy Haulage Website. Over the coming weeks I will be updating the site regularly as possible around my day job and other commitments.


This week I have been parts sourcing, I've got hold of the 5th rotor blade, I have kindly been donated to last two tail rotor blades. The build is slow this week but I have sourced both working platforms for the gearbox I will get them fitted this weekend. I have also had the logo designed for the cafe, this will help with promotional aspects of the project.