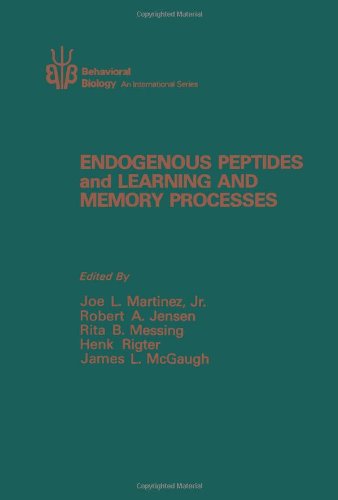 
Wan, R. Opioid modulation of working memory: intraseptal, but not intraamygdaloid, infusions of beta-endorphin impair performance in spatial alternation. Memory modulation across neural systems: intra-amygdala glucose reverses deficits caused by intraseptal morphine on a spatial task but not on an aversive task.

Retrieval and Reconsolidation: Toward a Neurobiology of Remembering

Intranasal administration has been associated with improvement on psychometric tests in patients with mild Alzheimer's disease and Korsakoff's psychosis, although these findings are not uniform. It improves performance on memory tests in normal volunteers, but does not seem to improve the memory deficit after head trauma. Cerebrospinal fluid levels are low in patients with Alzheimer's disease. ACTH and melanocyte-stimulating hormone MSH are two peptides the primary behavioral effect of which seems to be on attention or goal-motivated behavior rather than on memory processes themselves.